Jensen on individuality — a poster 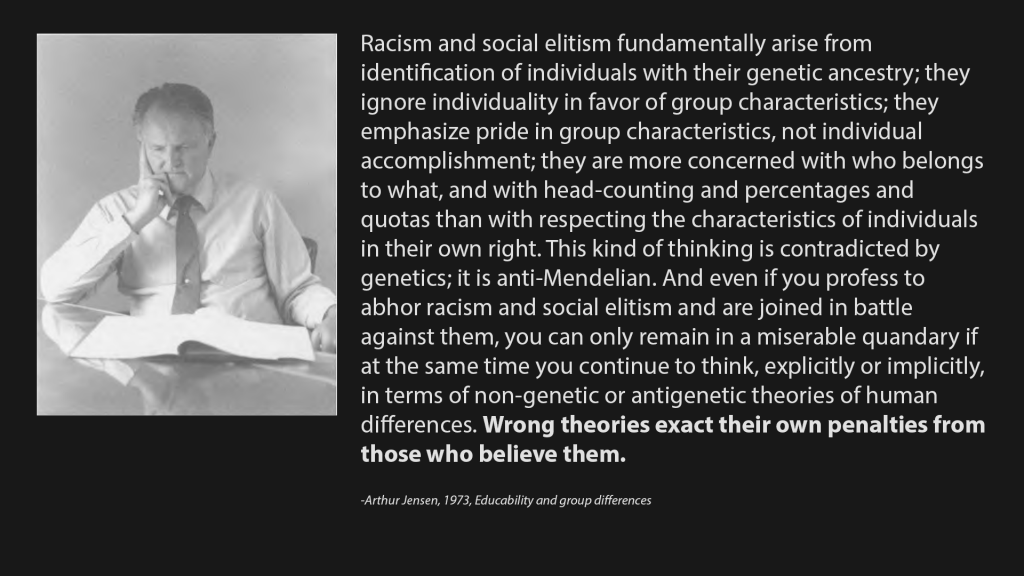 The quote is a part of a longer paragraph that appears in the cited book (which you can freely download from the archive).

The full quote is:

This distinction between the individual and the particular gene pool from which the unique combination forming his genotype was derived extends beyond his family to the racial group with which he is identified and to the social status into which he is born. You are not your race; you are not your group. You are you. That is, if you are talking genetics. If you are talking sociology or politics, that may be another matter. You may be psychologically tied to and influenced by whatever groups you happen to identify with. If you are either elated or depressed about yourself because of such identification, don’t attribute this to genetics. It in fact contradicts this kind of typology which compels so many persons to identify with various groups as if the statistical attributes of the group determined their own characteristics. Racism and social elitism fundamentally arise from identification of individuals with their genetic ancestry; they ignore individuality in favor of group characteristics; they emphasize pride in group characteristics, not individual accomplishment; they are more concerned with who belongs to what, and with head-counting and percentages and quotas than with respecting the characteristics of individuals in their own right. This kind of thinking is contradicted by genetics; it is anti-Mendelian. And even if you profess to abhor racism and social elitism and are joined in battle against them, you can only remain in a miserable quandary if at the same time you continue to think, explicitly or implicitly, in terms of non-genetic or antigenetic theories of human differences. Wrong theories exact their own penalties from those who believe them. Unfortunately, among many of my critics and among many students I repeatedly encounter lines of argument which reveal disturbing thought-blocks to distinguishing individuals from statistical characteristics (usually the mean) of the groups with which they are historically or socially identified. I know professors, for example, who cannot bring themselves to discuss racial group differences when any persons from different racial groups are present, and the fact that I am able to do so perhaps makes me appear insensitive in their eyes. I was once bothered by this too. I got over it as I studied more genetics and came more and more to appreciate its real implications. [original emphasis]